Posted on February 17, 2014 by liberalreligiongetsloud 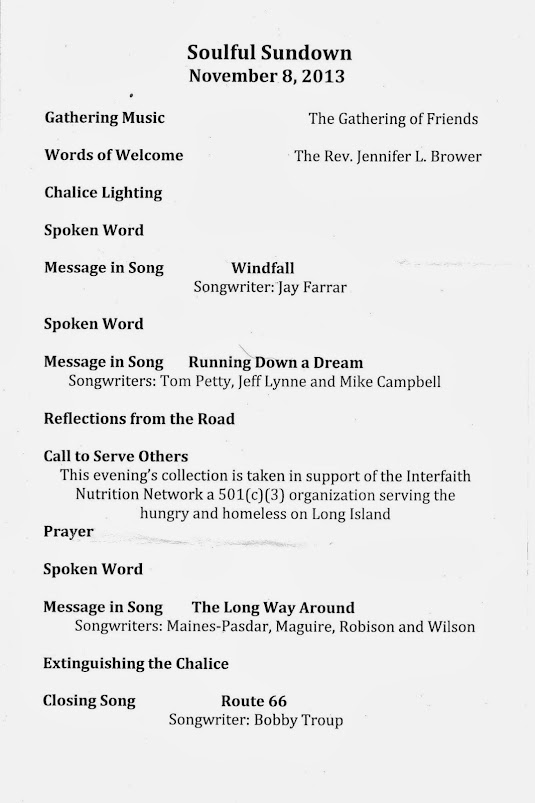 Here’s the order of service from a Soulful Sundown worship I attended a couple of months ago at Shelter Rock Unitarian Universalist Congregation in Long Island, NY. It was part of a full Friday night for UUs, with dinner in the social hall, the Soulful Sundown service, and a coffee house with a visiting singer/songwriter afterwards.

If the name “Soulful Sundown” doesn’t ring a bell, let me digress for some background. Soulful Sundown is a kind of rock vespers, a UU contemporary style service usually held on Friday or Sunday evening. It was developed at All Souls Unitarian in Tulsa as a way to appeal to young adults and there were a lot of UU congregations who started these services right around the turn of the millenium. (For example, Lavanhar Promotes “Soulful Sundown” Concept as Ideal Way to Minister to Young Adults.)

They’ve had an up-and-down history. Most of the original ones from the early 2000s didn’t last long. Already in the mid-2000s, when I was looking into the concept for our congregation, Tulsa was the only one remaining. The idea seems to have undergone a revival, however. Searching for “Soulful Sundown” now yields a good number of them around the country, and I think maybe our sense of what’s possible (and maybe what’s appropriate) in UU worship has finally caught up with Rev. Lavanhar’s vision.

So, back to the Shelter Rock service: To my mind, this is the essence of what “UU contemporary worship” could be: an expression of our faith and values with no reliance on traditional Protestant liturgy at all. A couple of things jumped out at me: first, the music, of course. Second, there is no “sermon”. Which is not to say that there’s no spiritual message from the minister. The segments labeled “Spoken Word” and “Reflections from the Road” were a combination of readings and a short homily by the minister. It was not a 20-minute dissertation on the topic, though the parts could have been assembled into one.

Rather, the spoken word and music were woven together organically throughout the service. The words were interspersed with songs from the popular repertoire that commented on or reflected the message (in this case, life as a journey and choosing your journey). It was a very fulfilling and thoroughly UU worship. 1

Last, there was no standing up and sitting down, no unison affirmation read from a hymnal, no singing of “Doxology” or “Spirit of Life”. There was nothing that reflected mid-20th century Protestantism (as carried on by typical UU liturgy).

And yet, the arc of the service was familiar: beginning with spirited singing, with a quieter time of meditation, prayer and contributing to others in the middle, and an uplifting mood at the end. The volume level may have seemed shockingly loud to some, but I noticed on Sunday morning that the congregation’s mammoth pipe organ produced about the same volume as the rock band, so I think that’s the sound level Shelter Rock operates at. 2

The main thing is that this “UU contemporary” service and every one I have participated in (at my church, at GA, at UUMN conferences) appeals not to an age demographic, but a spiritual demographic that reaches across the generations.

It’s what you want out of worship, rather than your age, that draws you to this kind of service. “UU young adults” are not automatically attracted to popular music in worship. And “older UUs” are not automatically repelled by it. Some of the younger ones prefer the symphony, and the older ones are members of the pioneering rock-and-roll generation. In my view, Soulful Sundown worship appeals not to an age group, but to a particular approach to one’s spiritual life. Some people prefer more formality in worship, some less. Some people want worship to inspire joy and celebration. Some associate a joyful and energetic worship style with a theology they despise. Some people just don’t like change (maybe that’s where the assumed appeal to the young comes in?).

Here’s the downside: these services are still considered “special events”. They’re typically held once a month, often in conjunction with some sort of “coffee house” entertainment afterwards. There’s nothing wrong with that, of course, but why couldn’t this obviously appealing style be a regular thing every Sunday morning?

There is much gnashing of teeth and rending of garments over the ~75% of people who self-identify as UU but who don’t belong to a UU congregation. I would bet good money that a lot — most? — of them are totally into UU spiritual values, but don’t have any interest in sitting in a service that reflects mid-20th century Protestant worship values. 3

We consider ourselves “religious liberals”. We have broken almost totally with Christian theology. It makes me wonder why most of us still worship like conservative Christians.

Footnotes:
1. Well, there was some dancing; maybe that’s not what most of us are used to seeing in worship.

2. Anyone who complains that rock music is “too loud”, while being blissfully blasted by a pipe organ in a small sanctuary is objecting not to volume, but style.

3. I have seen no data to support or contradict this assertion, so you may ignore it as you like. But do ask those “free range” UUs you meet what keeps them away from your congregation and what would make them comfortable there.